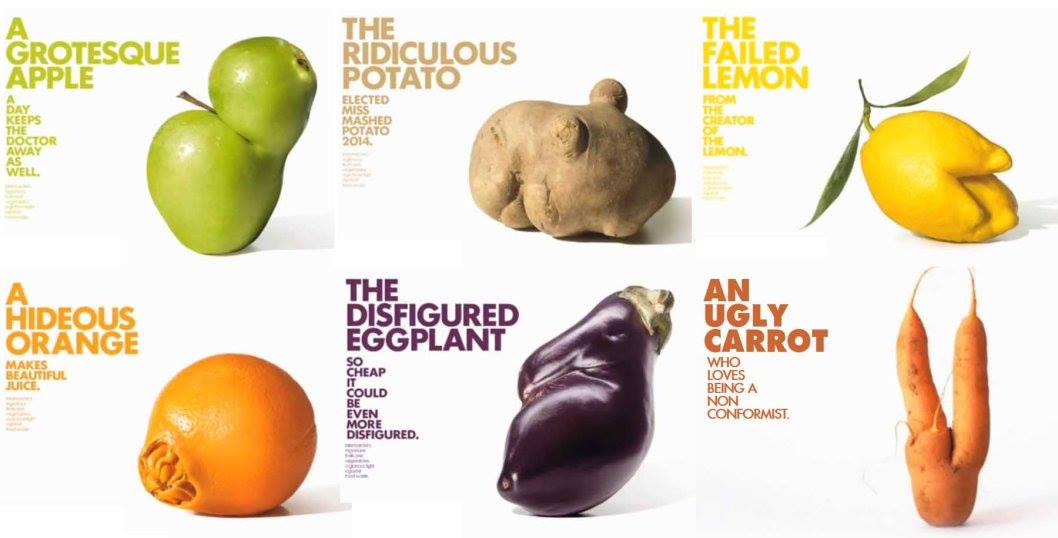 We, as customers, tend to purchase items which are in perfect shape or at least with no apparent physical damage. Fruits and vegetables are facing the same plight resulting in tons of food waste. The EU addressed the issue in a global conference [1] and developed a social campaign coined as Inglorious Fruits & Vegetables.

The campaign [2] was developed by Marcel Worldwide for the French supermarket chain Intermarché. Not only do they embrace the disfigured items by advocacy advertising, but also designate a special aisle to sell them. Consumers enjoy a 30% discount when they purchase the grotesquely shaped items. Sales elevate by dint of the campaign, and so is the brand image of Intermarché.

What makes the Inglorious fruits and vegetables stands out among all?
Campaigns akin to social missions of environmental protection are burgeoning in recent years. Intermarché’s campaign is paid off by extensive media coverage and awards. The idea fits in well with the global trend and appeal to both consumers and suppliers. After the EU sets the year as European Year Against Food Waste [3] , timing of the campaign launch is just about right when the public is still concerned with the matter.

Protecting the environment is an indisputable priority for most people. There is no surprise that it stirs up positive public sentiments and actions. It is on the one hand, catching up with public agenda; on the other hand, conforms to the interests of other stakeholders. Just as what Intermarché mention, the campaign creates a win-win situation. The suppliers need not toss away the inferior fruits and vegetables and the consumers get cheaper but just as appetizing products. It brings satisfaction to both for concerted efforts contributing to food waste reduction.

The prominent and participative channel implementation attributes to the success too. The aisle selling inglorious fruits and vegetables is placed at noticeable spot retail space with enormous billboards on top [4]. It extends the reach and ensures that buyers get the idea. The products are not limited to merely fruits or vegetables. Juices and soups made from the inglorious food are sold at the same time to alleviate the concern on quality. The advertising executions are clean, simple and eye-catching. It wins the graphics category for Design of the Year 2015 from London’s Design Museum [5]. “A fly in the ointment” (美中不足) is the nickname given to the products.

Both the campaign idea and the execution account for the campaign success. With the view of the accomplishment, Intermarché has launched a similar campaign with ugly cookies [6] in 2015. The promotion idea of “ugly produce” seems to be a scalable concept for addressing food waste.