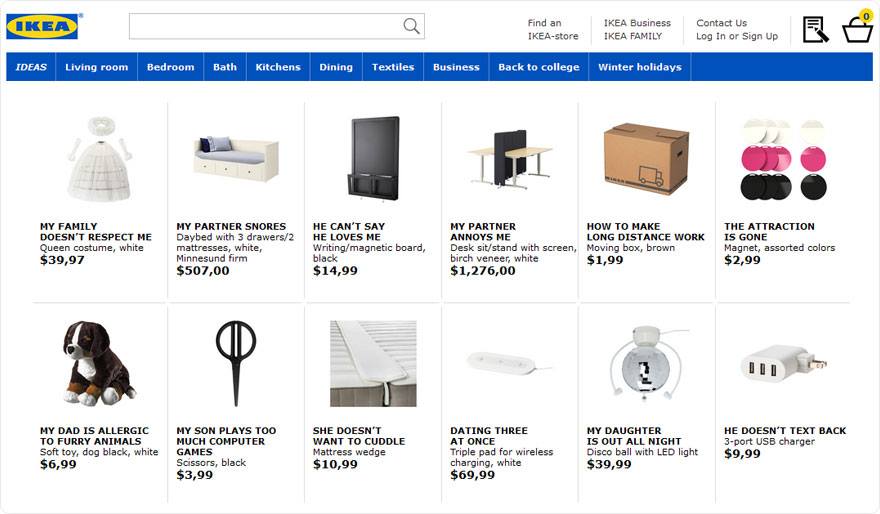 If you are in the midst of any relationship issues, Google your concern and you would be surprised with the results you see. When you Google “How to make long distance work?” in Sweden, the search may result in an IKEA brown moving box of the same name.

No worries, your search engine is working fine. IKEA has worked with Swedish creative agency Akestam Holst and launched the “Retail Therapy” [1] campaign in November 2016. The furniture company renames selected products after the most common Google searches for relationship advice in Sweden.

What? Furniture can help solving relationship problems?
Apparently, IKEA is following the meme trend on the internet, try to generate humor appeal content that has the possibility of going viral amongst customers for brand good will. The answers to the problems are enlivening. For example, an easy answer to “My son plays too much computer games” is a pair of scissors (to cut the wires); while “The attraction is gone” points to magnets (because the attraction is always there). These tongue-twisting named furniture items may not really help out on your troubles, but “at least put a smile on your face while you keep Googling for an answer”, as narrated in IKEA’s retail therapy advertisement [2].

The campaign is witty in presenting IKEA is a brand that always is “inspired by how people live in the real world”. The campaign may not be much of a sale booster, but rather asserting its product to support the core brand value of IKEA in offering “A better everyday life” to consumers. By offering subtle solutions to customer’s relationship issues makes the brand sincere and likable, and tactfully differentiates itself from competition.

Taking on the path of customer engagement for relationship building
IKEA has been making effort to engage customers for brand building for quite some time. IKEA FAMILY Global Soft Toy Drawing Competition [3], inviting kids to co-create its next soft toy collection, has been held for a 3rd consecutive year 2016.

By giving relationship advice to customers like a friend is surely a warm touch! “Of course, we’re not saying that we can solve every relationship problem people might have, but perhaps we can remind them of the fact that IKEA might be able to offer you some relief.” said Magnus Jakobsson, the agency’s creative director [4].

Despite the attention-getting creativity, IKEA is trying to inject emotional value into rational products. By linking the items to consumers’ daily life, consumers could well be persuaded to buy the furniture items, not so much because need it but rather want it. The campaign after all, contributes to IKEA’s top-of-mind awareness to boost sale.

IKEA winning merit of the campaign is the benevolent capitalization of search engine optimization (SEO). The crossover with Google makes so much sense in today’s technologically dependent era. The campaign thus generated huge media coverage and an abundance of likes, comments & shares [5].