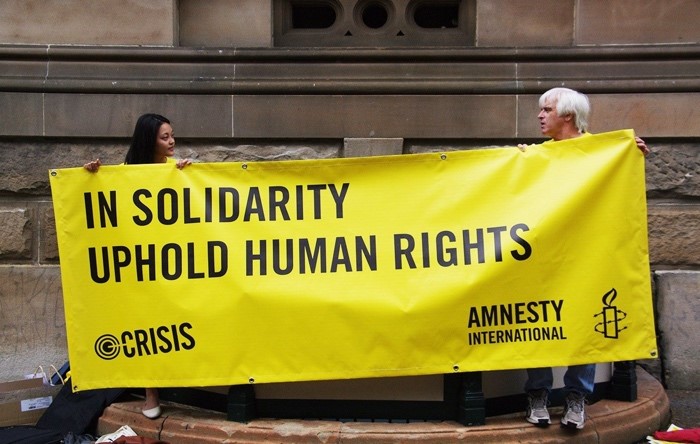 The potential impact of product placements has attracted Amnesty International (AI), one of the largest human rights NGOs, to adopt this approach. Positioning itself as a brand, with human rights activism as a product, AI receives volunteered marketing from agencies and interested filmmakers (Winston, 2017). Common approaches include placing its signature logo (visual placement) and embedding human rights issues (auditory placement) in popular TV series and movies using an array of strategies.

Visual placement is the most commonly used tactic. Visual cues are usually uncluttered and prominent, but blended into the background. It may not interact with the characters or have any significance in the plot. For example, in the films Avengers and 21 Jump Street, Amnesty’s candle-and-barbed-wire logo and poster appeared on the top of taxi and in high school respectively. Seeing the images of Amnesty in films achieves brand recognition and the placement in nonpolitical settings portrayed human right advocacy as a normal part in everyday life.

Another tactic is auditory placement. Audio cues are often spoken by characters and have significance as to their role in the scene (La Ferle & Edwards, 2006). For example, in the film Slumdog Millionaire, a bad police inspector who often tortures his prisoners mentions that he is afraid of AI exposing his actions. Hearing such words in the film not only serves a specific plot, but provides effective advertising – As a bad character who discredits AI, audiences will subconsciously have a positive impression towards the organization (Russell, 2002). Even though product placements help with brand recognition, which is vital for NGOs who are constantly seeking visibility and funding, it also brings out ethical issues. To start off, the underlying image of AI may be contaminated. As AI has built up a reputation as an independent, credible NGO. People have trust in AI because they believe AI’s actions will not be swayed by money (Hopgood, 2006). If AI is involved with too much corporate sponsorship and advertisement, people may no longer view it as trustworthy. Next, there is the shifting focus from the needs of grassroots to the brand identity of AI.  Instead of focusing on what human rights need to be improved, people will be more focused on the brand name of AI.  By linking nonprofit work with entertainment, people may no longer take the work of activists seriously. Waldorf (2012) also suggested such actions will raise their moral apathy towards distant suffering.

In essence, product placement is an intentional deceptive tactic (Winston, 2017). Their purpose is to subconsciously ingrain a brand or product into the audiences’ minds. For example, if people want to donate to charities, the first name that pops up in their head will be AI. However, this may be unethical, because AI has always encouraged transparency in all of their work. Hiding themselves with marketing tactics are not exactly setting the best examples for others to follow.

Russell, C. A. (2002). Investigating the effectiveness of product placement in television shows: The role of modality and plot connection to congruence on brand and memory attitude. Journal of Consumer Research, 29, 306–318.