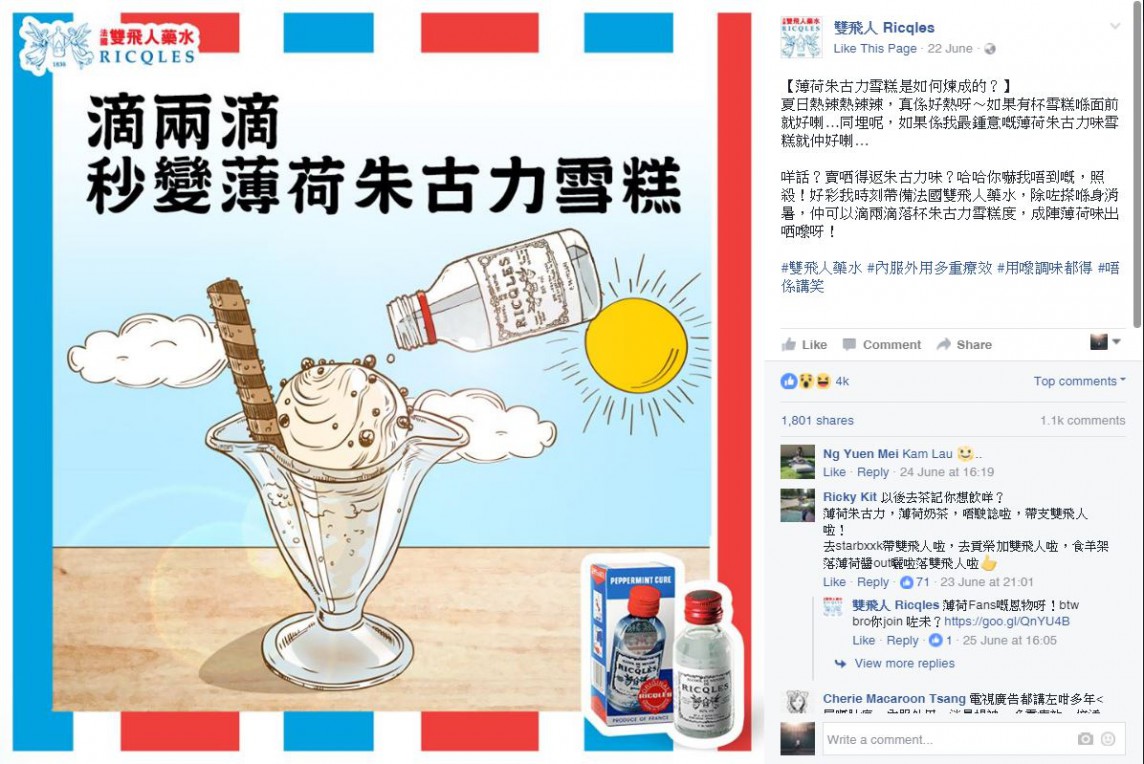 It is not the first time Ricqles creates graphic post suggesting adding it to food. The new suggestion of adding Ricqles drops to chocolate ice-cream created the largest buzz ever on Ricqles Facebook fans page. The two posts have attracted over 89,000 views, 5,000 likes and 2,300 shares. The total number of fans boosted 25% from approximately 6,400 to almost 8,000 in just two weeks. Apparently, Ricqles is doing a great job considering the page does not have large fan base and the cost of the posts are very low.

The major competitor of Ricqles should be White Flower Embrocation oil because their uses are very similar. The fragrance of White Flower is a lot stronger, more recognizable and is very well-accepted in the Asian consumer market. Embrocation oil is usually distinguished by their fragrance and it would not be favorable to Ricqles because of its week aroma. It is quite clever of Ricqles to deal with the issue by focusing the promotion on the differences in usage, being edible with excellent peppermint taste. Ricqles is successful to differentiate itself from White Flower in a creative way.

Before the two posts, the brand image of Ricqles is quite old-fashioned which does not appeal to youngsters. On the contrary, White Flower Embrocation has been anxious to break into the younger age segment: the brand is active on Facebook; has developed a new product line less strong aromatically in a trendier packaging. The two posts helped Ricqles to turn its brand image to a more playful and creative persona, which better match the style of youngsters.

However, targeting to youngsters should only be the first step as I do not think that the two posts can boost immediate sales a lot. Ricqles is not reinforcing the efforts online to proliferate the effect, such as collaboration with ice-cream brands or sale promotion packs.

To target consumers who are not enticed by strong fragrance, it is advisable for Ricqles to highlight its mild scent due to absence of the ingredient, holly. This may help to heighten the top-of-mind awareness of Ricqles on top of just promoting its edibility and nice mint taste.

The posts left consumers with an impression that Ricqles is medicated product with seasoning as its secondary use. I have to say this is rather vivacious but awkward, and subject to further convincing.

Even there are some drawbacks of the posts, I still like them because they are impressive, quite creative and the drawbacks are not detrimental. For a reputable 178-year-old medicated product from Europe, I look forward to see more vibrant promotions from Ricqles to energize the market.