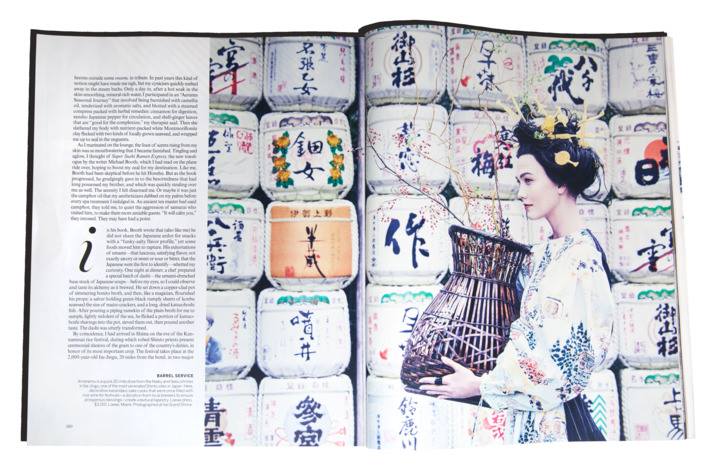 The 6-page spread of American model Karlie Kloss dressing up as a Geisha in Vogue US’s March issue [1] has turned out to be a textbook example of cultural appropriation: Recruiting a culturally irrelevant Caucasian woman to portray a Geisha, a well-respected Japanese entertainment art icon, is apparently an offensive decision. While the model has quickly apologized for being culturally insensitive on her social media, the magazine has yet to comment on the issue.

With 21 international editions, Vogue prides itself to be a fashion magazine that “places fashion in the context of culture”. Although the magazine stresses its embraces of diversity and individuality, this is not the first time Vogue has shown its insensitiveness towards racial issue. In 2008, they compared Lebron James, an African-American basketball player, to King Kong, a giant gorilla and used that picture as the magazine cover.

Ironically, the issue in which Vogue presented a white Geisha is actually Vogue’s attempt to display cultural awareness. The theme of Vogue’s March issue is “WOMEN RULE!”. Captioned “no norm is the new norm”, the cover featured 7 famous models of different ethnicities. It is exciting to see Ashley Graham, a plus-size model, graced the cover with Liu Wen, the first Asian to appear on the cover of Vogue since the 1930s. However, it is quite obvious that Vogue has a different ruler for measuring diversity. The range of the models’ skin tone is not representative of the diversity of modern women. Some have commented that none of them is “darker than a brown paper bag” [2], as all of their features are so similar and fall under the traditional modelling beauty standard.

When it comes to diversity, Vogue is not the only brand that faces difficulty in keeping their products coherent with its brand identity. Take cosmetic brand BareMinerals as an example: In 2016, they were criticized for coming up with the tagline “True To You” for their foundation when in fact there are only 2 shades suitable for darker skin tones in the entire collection.

Long-term commitment is necessary to build and maintain a consistent brand identity. Dove used over 10 years with multiple strategies to consolidate its mission to promote “real beauty”. Cultural sensitivity is not something that could be constructed with just one magazine issue. Vogue, with 125 years of history of being a trendsetter in high fashion, is currently caught between two stools. It may not be susceptible to the drastic and abrupt transition in terms of artistic direction and style. Struggling to strike a balance between keeping it high class and representative of reality, the March issue has only exposed Vogue’s weakness in interpreting such a profound value shallowly. While diversity and beauty are not two mutually exclusive concepts, at this point, it may be a better idea for Vogue to just focus on one aspect.