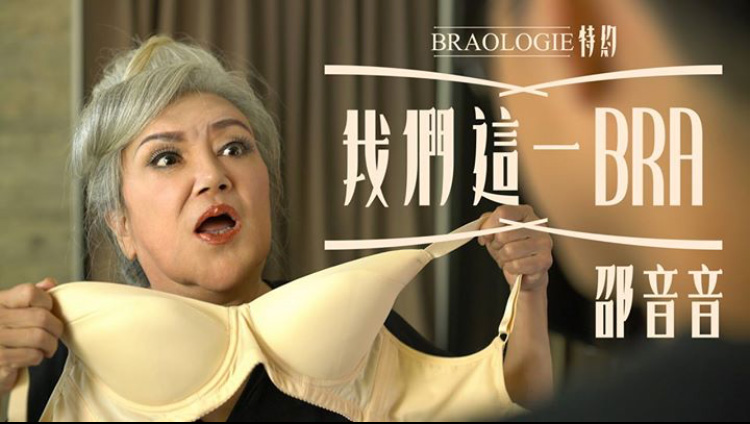 When Lingerie Model Is Not A Hot Lady

On 30th September, 100Most posted an advertisement video with collaboration of a lingerie brand Braologie on its Facebook page. Within one single day, the video has gathered over 800K views and 150K “likes”. What makes this video become so viral and popular?

When it comes to lingerie advertisement, most of the time it would be associated with hot, young, sexy and physically attractive models. Braologie abandoned the conventional “lingerie + hot model + audience’s imagination formula” by casting a 70-year old actress Susan Shaw Yam Yam (邵音音) as the ad protagonist. The perceived persona of Shaw is a person who dares to speak up and speak out. The “WOW” effect in the ad begins to surface when Saw starts to include Cantonese foul language in her conversation with a male customer, not for insulting him but as strong adjectives to emphasize the ad message. Audiences feel fresh and something different in this brand. Some may even find it interesting and hilariously funny.

The ad reveals a problem that most women encounter in their life. That is the uncomfortable feeling of wearing an unsuitable bra. Female audiences resonate powerfully with the ad and the ad forms a strong tie with them. Also, the ad is informative that it can tell audiences what specific and tailored services are provided by Braologie. For example, its price, its unique selling point of providing 45 minutes one on one professional fitting and consultation. It successfully introduces an alternative lingerie brand to ladies and induces them to get to know more about this brand.

Approaching the consumer journey with a new outside-in angle

Buying a right bra seems to be a woman’s matter only. However, this ad starts with a man buying a bra for his girlfriend. As the society is getting more open, it is quite common to see boyfriends accompanying their girlfriends to shop for bras in lingerie shops. Male audience may even recommend this brand to their girlfriends after watching this ad. At the end of the ad, a message pop up and says that Braologie helps men understand the inconvenience and pain suffered by women. The message focuses on men rather than women and it has an advantage of showing Braologie as a caring and a considerate brand.

It is beyond doubt that the ad is full of creativity. Since the ad’s release, it has gathered 2.7 million views, 37K likes and 26K shares. Although it still remains a question whether the likes and shares actually help to boost Braologie’s sales and financial effectiveness, I believe as less wide-known brand in the category, Braologie surely succeeds in gaining brand awareness on the social media and the public. At least, people who have never heard of it before may be interested to find out more.