A “Virtual” Look into a Pig’s Life 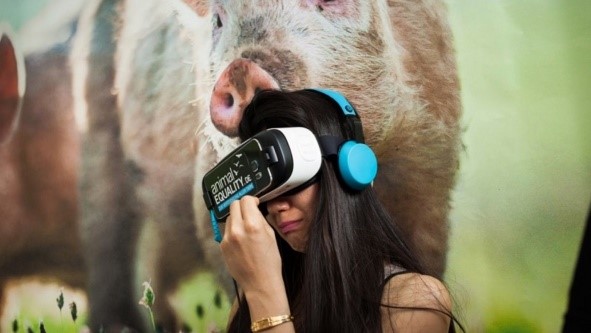 People must have imagined being an animal and living a simpler life. But have you ever thought of being a pig whose life is all about growing up, getting cut up, and ending up being swallowed down into humans’ stomach? Do you still feel excited about experiencing a life like that?

That is what Animal Equality, an international animal advocacy organization, has done with their recent VR production. Their project “iAnimal” gives people a look at the life cycle of factory-farmed animals from gestation to their death.

When we think of virtual reality, we immediately think about video games; Yet VR is becoming an important message-broadcasting tool. An Increasing number of non-profit organizations have been using VR to create story-telling experiences that help people to see the world from another perspective. It adopts an emotional appeal and evokes empathy among the audience, so they have an intersubjective understanding on those in need and the cause of different meaningful campaigns In the case of iAnimal, the film places the audience inside a factory farm and slaughterhouse with families of pigs, seeing the inside of a gestation crate where they are impregnated, a farrowing crate where they give birth, and later the slaughterhouse where they are killed for their meat. “Viewers will inhabit the cruel world humans have created for animals, feeling their suffering. This extremely empathetic experience will change, and save, lives,” said Sharon Nunez, Executive Director of Animal Equality.

In a study on changes in attitudes and meat consumption by Aalborg University in Denmark, researchers found that immersive virtual reality videos are more impactful than traditional screen videos. By using VR, shocking and powerful visuals could be created to impact the audience’s emotions and deliver insights on the ethics of eating meat. Peter Egan, a British actor and one of the first groups of the audience watching the VR said, “It’s devastating, and completely inhumane. Virtual reality enabled me to experience, close up, for just a few minutes, the horror of the short lives of factory-farmed animals, to see what they see, to get a real sense of how they live. It has shocked me deeply, and it has strengthened my resolve to help them.”

In another study, participants responded in a survey after watching videos of animal cruelty, in which they showed an increase in empathy, interest in vegetarian food, and desire to reduce meat consumption. This reflects success in campaigns like iAnimal, which could impact people to take action, make a change and protect animals from cruelty. However, some people think that the video has pushed too far. The VR was first previewed in Sundance Film Festival, where some audience felt upset and reflected that the content was disturbing, sparking a debate about VR ethics and content censorship.

To or not to eat meat has been a heated ethical debate for years. There is never a “correct” stance towards this issue. Whether or not to use VR in campaigns to raise awareness and empathy towards this issue is going to be the next ethical debate. Though adverse impacts could be made by showing overly disgusting and cruel scenes, these are real-life incidents experienced by lives as equal as ours. Hence, one must agree that the visual effect created is indeed a powerful tool encouraging people to support a good cause.

23 Types of Advertising Appeals Most Commonly Used by Brands. (n.d.). Retrieved from https://visme.co/blog/types-of-advertising-appeals/