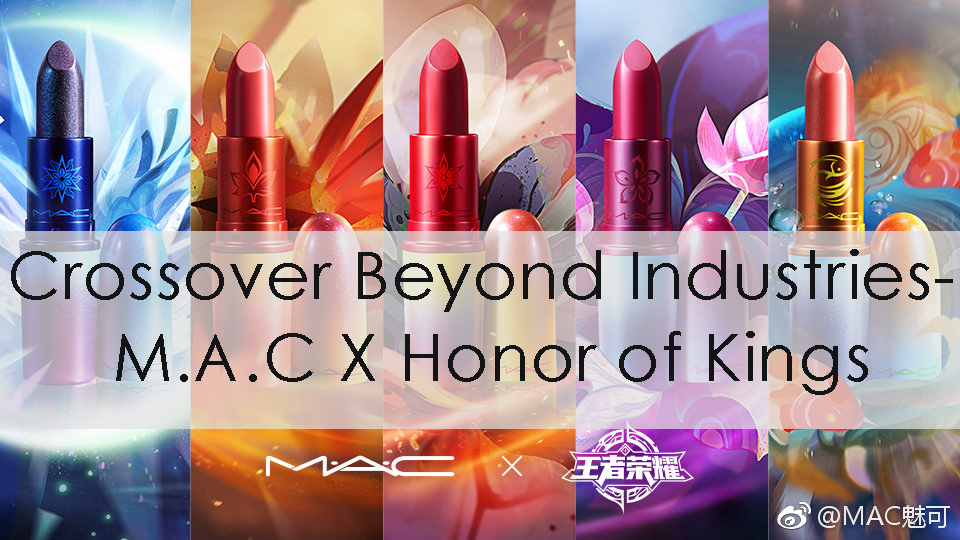 Recently, the crossover between cosmetic brand M.A.C and mobile game Honor of Kings (王者榮耀) has set off a craze in China. They matched the color number of lipsticks with the name of the heroines in the game and invited a popular girls’ group to be the ambassador of the collaboration.

The concept of crossover comes from co-branding, which implies the physical or symbolical combination among two or more brands represented by the association of brand names, logos or other proprietary assets of the brand in order to acquire effective marketing spread and penetration (Simonin & Ruth,1998). Through intensive online and offline marketing, the M.A.C and Honor of Kings crossover went out of stock in just an hour, followed by high-priced resales on second-hand platforms.

The well-received crossover mainly targets two groups of consumers: Female mobile game players and male players who want to buy a gift for their female friends or relatives. The former group is willing to buy a lipstick that is associated with their beloved game character making them feel like part of the gaming experience as well.

The price of the crossover lipsticks is 170 CNY (around 200 HKD) each, which is the same as normal M.A.C. lipsticks. The special package design resembling different in-game characters and limited supply further boosted consumer desire to buy. Compared with  other high-end brands, the price of a M.A.C lipstick is more affordable for the younger consumers, who is a vital player group of Honor of Kings. In addition, the crossover differentiates  M.A.C.

For this campaign, M.A.C. used  a variety of IMC tactics to attract consumers.

The slogan for the crossover campaign is “吻住，我們能贏” (sounds like: Hold up, we can win, characters mean: kiss, we can win), combining the call for winning the game and the characteristic of lipsticks. To make the connection closer, the popular heroine in the games are paired with the old color of M.A.C. lipsticks with new packaging. Their identities are carefully integrated into the promotion, in which their characteristic slogans are publicized on various advertisement.

Meanwhile, M.A.C. opened a theme store for the collaboration in one of their physical stores in Shanghai. Interactive and eye-catching elements are included in the store: LED screens are playing advertising films of the crossover; a wall with the crossover series lipsticks with gaming feature designs are used to decorate the store. AR technology, sensor light bulb and RFID technology are also adopted to provide a unique lipstick try out experience for customers.

Moreover, M.A.C and Honor of Kings worked with Rocket Girl 101, in which the members of the pop star group were dressed up like the heroines in the game while wearing the crossover lipsticks, aiming to engage with Rocket Girl 101’s fans. The theme store and star collaboration are part of their PR strategies, which helped the brands to attract customers through real experiences and influencer marketing. To get a taste of the collaboration series, consumers can find out which lipstick suits them the best by using the photo APP  “Tiantiantu”, which provides users with makeup filters that simulate the effects of the cosmetic products on their faces.

The campaign successfully attracted consumers in both gaming and cosmetics industries. The collaboration received extensive media coverage including reports by SOHU and The Beijing News. As for Wechat and Weibo, numerous posts were made by its users, one of which  received over 15,000 views on Weibo and more than 100,000 views on Wechat.

Despite the well reception, some consumers were not impressed as they believed the campaign has no originality and only offered repackaged lipstick colors. Although the attitude toward this campaign is polarized, this is no doubt a smart and popular crossover campaign. Moreover, this campaign is a good example for foreign brands planning to reach the millennials in China market.

In recent years, more and more brands have embarked on the road of crossover. A successful crossover can bring enormous benefits. First, the crossover can have a 1+1>2 effect. Not only can it attract the fanbase of two brands simultaneously, it can also gain public attention easily. Moreover, crossover helps to enrich their brand profiles and refresh their brand image.

At the same time, consumers’ buying attitude is becoming more sophisticated. Consumers are no longer satisfied with simple and explicit crossovers, where the logo of two brands appearing on a product. They expect crossovers to be more elegant and awe-inspiring, with surprising collaborative partners and unique products that could become collectibles. Thus, brands need to design the crossover campaign creatively to surprise the targets.

Crossover is arguably the biggest recent market trend. By collaborating with a brand of different nature, crossovers can help enterprises to enlarge their target consumers base and rejuvenate their brand image with the help of various IMC strategies. However, the normalization of brand crossovers could pose a new challenge: as customers are accustomed to the trend, the strategy may eventually lose its impact; while some companies blindly jump on the bandwagon with their lackluster attempt.  Brand crossovers is not a guaranteed success: only with careful planning and thoughtful collaboration can the product line stands out in the market.