How a campaign made its mark on the government? 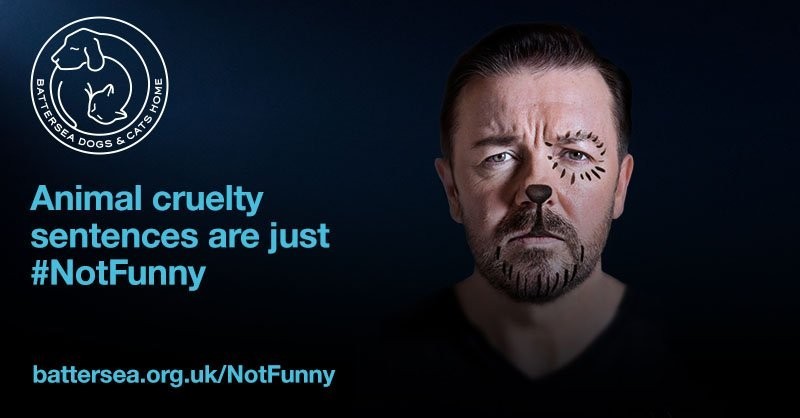 What if one day comedians no longer make funny jokes? Some of the famous comics from the UK are now telling you something is just not funny. Hiding their smile and quirky side, they worked together to raise awareness on a subject that’s no laughing matter– animal abuse. Ricky Gervais, Paul O’Grady, Sue Perkins, Tracey Ullman and Harry Hill all stood up for an NGO campaign and urged the public to make a difference.
Not long ago, England and Ireland’s maximum prison sentence for animal cruelty was merely six months, which is the lowest across Europe, the United States and Australia. It wasn’t until August last year when the UK government agreed to introduce a five-year maximum sentence for the offence, proving the remarkable success of #NotFunny campaign. Battersea Dogs & Cats Home, an animal welfare organization, which cares for homeless canines and felines at its adoption centers, launched its #NotFunny campaign in February 2017. Having teamed up with some of the most beloved comedians, they told the world why sickening animal cruelty cases have to be treated seriously. Such acts of cruelty are not funny at all–aside from the lenient maximum sentence. They called for an increase in maximum sentence for animal cruelty to five years. By introducing the message through renowned yet local stars, the message conveyed to its audiences was highly effective. While celebrity endorsement is ubiquitous today, Battersea had made the right choice of celebrities by shaping the contrast of the rarely-seen serious side of comedians with animal cruelty. Not only could this grab the public’s attention, it also helped deliver a memorable image. These comedians’ famous faces have been on billboards, posters and digital screens at more than 170 locations around the country. Battersea also made good use of digital media in which the hashtag #NotFunny helped generate support on Twitter and other social media platforms. Not only did Paul O’Grady, Ricky Gervais and other comedians supported the move, other charities and the public also weighed in by posting their own videos and profile pictures on Twitter claiming, “I’m joining @BDCH & standing up for the animals.” #NotFunny campaign went viral both offline and online very soon. While most non-profit organization campaigns strive to raise awareness for a specific issue among the public, it seems that the objectives of organizations can go far beyond it. Battersea is a prime example, as they drove a direct change in society. Over 62,000 people have contacted their local MP (Member of Parliament) for support. The number of supporters did not directly make a change in law, but it became a very positive step to show the government how strongly the public feels about the unjust sentence. After the campaign, the government committed to get tough on animal abusers and consider increasing the maximum sentence to five years. #NotFunny campaign has made its mark in Government policy.

When we talk about animal cruelty, it’s a common practice for NGOs and charities to use emotional appeal by showing negative imagery or past extreme cases and stories, just to whip people up. Yet, has the public had enough? Rather than going down the old path, Battersea created a memorable and mobilizing campaign, which reminded people animal cruelty is nothing funny to anyone.