Will TVB lose the game? 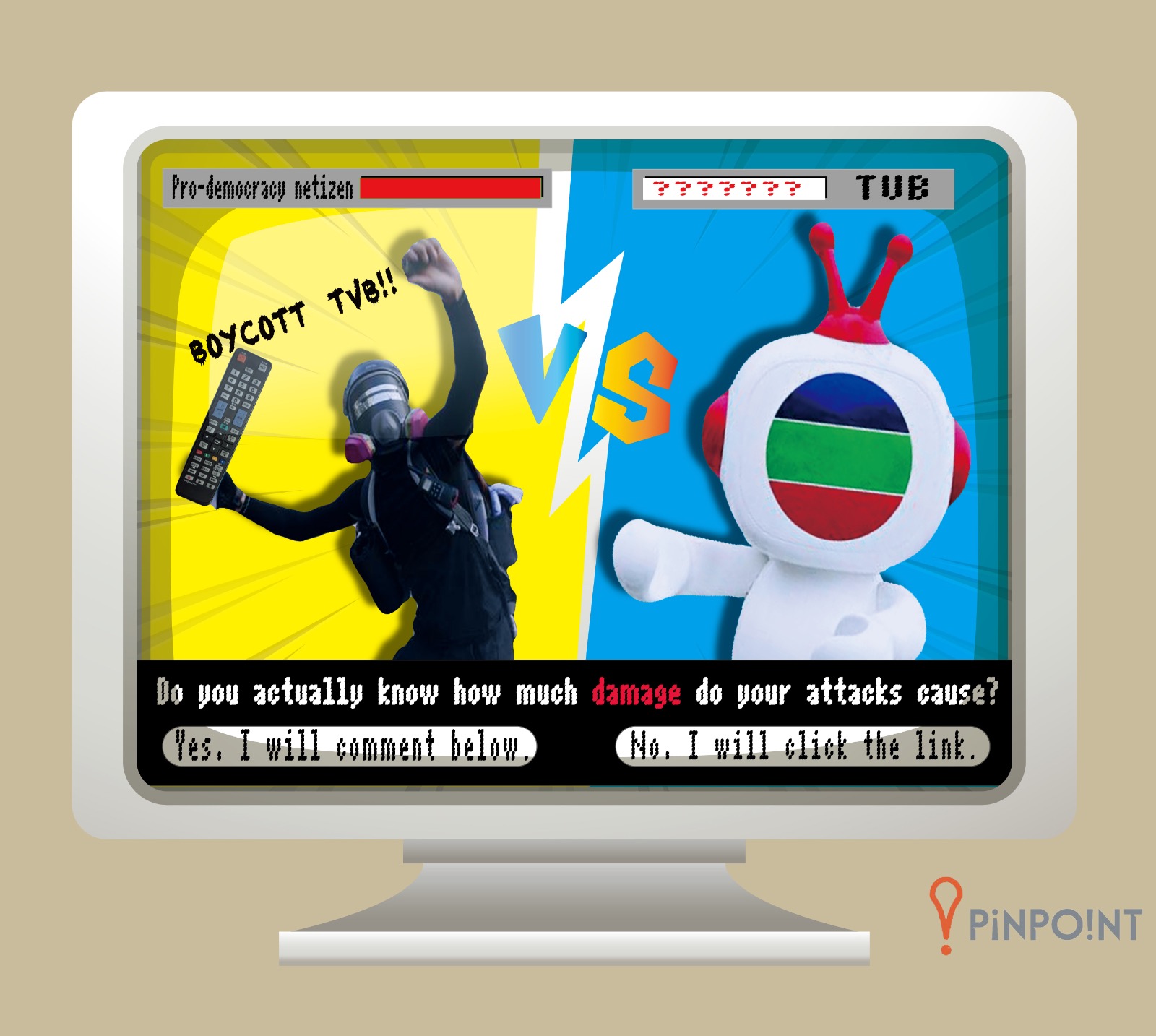 TVB is a long-standing broadcasting company in Hong Kong. It used to be powerful, but starting from the social movement back in June 2019, there is a growing voice in society advocating for the boycott against TVB. This article will examine the boycott’s background and the impact it has caused so far.

How does TVB earn money?

The business of TVB mainly covers traditional broadcasting in Hong Kong, myTV SUPER, Big Big Channel, programme licensing and distribution, as well as Overseas Pay TV and TVB Anywhere. Its major source of income came from HK TV broadcasting, which provides free-to-air broadcasting of 5 terrestrial TV channels, including Jade, J2, TVB News, Pearl, and TVB Finance and Information. This accounts for 62% of revenue in the first half of 2019 (Television Broadcasts Limited, 2019).

How did TVB perform?

TVB’s HK TV advertising revenue for the first half of 2019 experienced a mild drop of 1% (Television Broadcasts Limited, 2019). Compared with figures in recent years, such half-year revenue is considered as relatively low. This indicates that a slow or even negative growth is likely to happen.

It seems that TVB had gone through quite a trough in 2019 even though the final result has not been announced yet. Unlike the previous years, TVB did not raise this year’s advertising fees by 3% to 5% (Yahoo! Finance, 2019), as they no changes to their rate card.

In addition, TVB lowered the advertising commitment requirement from 100% or above to 90% (Yahoo! Finance, 2019). The advertising commitment scheme is a binding yearly contract signed by the broadcasting company with brands. Broadcasting company provides discounts in exchange for brands’ higher amounts of money committed to advertising airtime. The act of lowering the requirement lowered the entry barriers for placing TV advertisement.

What have netizens done against TVB?

Beginning from early 2019, after the introduction of the Extradition Bill, TVB was again accused of pro-Beijing bias in its news coverage amid the political crisis. Protesters believed that the channel selectively focuses on how the protests destroy Hong Kong’s social order, without showing comprehensive facts and other factors such as police brutality. TVB put the camera focus mainly on how protestors are causing havoc; while broadcasting live, TVB is accused of avoid filming how police are enforcing violence on protestors. Therefore, netizens started the boycott by urging advertisers to stop placing ads on TVB.

On one hand, social media and messaging apps, including Instagram and Telegram, are widely used by netizens to spread the reasons and instructions of boycotting TVB.

On the other hand, they persuade citizens to stop watching TVB by pointing out the absurdity in its programmes. For example, in the programme Young And Restless (Chinese: 後生仔傾吓偈), one of the hosts claimed that SARS originated from Hong Kong in 2003 (HK01, 2020). After that, TVB is severely criticized by the general public for spreading misleading information.

In addition, channels like Facebook and Instagram are created to urge companies to stop their relationships with TVB. They aim to persuade netizens to give negative comments and “angry” reactions to posts from brands that have not yet cut ties.

Is the boycott effective?

Several big brands such as Pocari Sweat, Pizza Hut, Trip.com, Choi Fung Hong and more, have either pulled out their advertisements or stopped renewing contracts with TVB.

In light of the boycott, the Japanese sports drink Pocari Sweat was the very first brand to comment on the situation (Dimsum Daily, 2019). The company stated that a comprehensive review on its media planning would be done towards TVB and it has also taken a proactive step to urge TVB to respond to public concerns. Apart from the channel itself, brands such as 20 beauty, a local body hair removal company, have also stopped using TVB artists as their spokesperson in response to the boycott.

To further measure the effectiveness of the boycott, the prime time of television programmes from 8 p.m. to 10:30 p.m. is observed between 17 and 19 February in 2020, after the boycott has been implemented for a period of time. TVB and one of its competitors, ViuTV, are selected for comparison.

From the table, we can see the huge difference in commercial breaks between them. For TVB, the number of self-publicity is 1.3 times that of business advertisements. But for ViuTV, there is an opposite case. The number of the former is 0.54 times that of the latter.

The ratios reflect that TVB has a much smaller proportion of business advertisements compared with ViuTV. The observation may imply that brands are reluctant to advertise on a broadcasting company that is suffering from public disdain. To protect the brand image, more and more brands may give up their cooperation with TVB. From the above, the boycott seems to be effective.

How will TVB perform?

Based on the analysis above, it clearly shows that the shrink of advertising revenue may lead to the recession of TVB in the future. Although some people may think that TVB will not suffer because its TV rating surged in February. The surge is due to the recent epidemic and the inertia in watching TVB (Stand News, 2020) rather than the invalidation of the boycott. While these two reasons may result in people’s need to kill time at home by watching TVB, it may not lead to their antipathy towards the boycott against TVB, the number of the audience could continually decrease if netizens maintain or even reinforce the boycott. The stock price of the company could then drop too. Thus, to counter the possible declining financial performance and fierce competition, the best suggestion for TVB is to put more resources on their over-the-top (OTT) service, myTV SUPER. TVB can take advantage of their reputation in some other Asian countries, and attract more Chinese-speaking audiences there.

The boycott TVB movement may affect the brands’ marketing strategies as well. Since TVB and ViuTV have been politically linked to pro-government and pro-democracy, brands that are airing TV-commercials on TVB or ViuTV are easily engulfed in political issues, or even public relations crisis. Therefore, to avoid political risks, brands should consider advertising on their self-owned media channels, like social media platforms and mini-sites rather than TVB or ViuTV. Nevertheless, brands can still get excellent advertising results from their self-owned media channels in this digital era.

Dimsum Daily. (2019, July 10). Many brands allegedly put the brakes on TVB commercials after Pocari Sweat severs ties with the station. Retrieved from https://www.dimsumdaily.hk/brands-tvb-commercials/